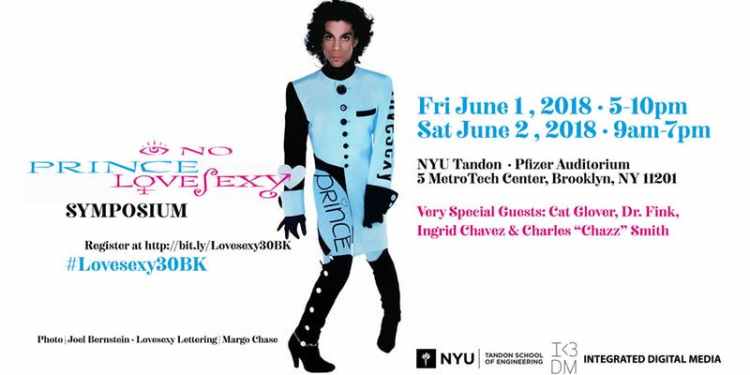 Following the success of the Prince From Minneapolis Symposium and in the next stage of the development of what we are now terming “Princecology”,  EYE NO Prince Lovesexy Symposium will celebrate the 30th anniversary of Prince’s tenth album, Lovesexy at NYU Tandon on June 1st and 2nd 2018.

Professor Mike Alleyne and I will present Glam Slammed: Visual Identity In Prince’s Lovesexy. The paper will explore  the ways in which Lovesexy signalled the beginning of a period where Prince wrestled with moral and spiritual questions. We will consider how the central tenet of the album, the battle between God (good) and evil (the Devil, personified as “Spooky Electric”), which largely seems to be an internalised moral struggle, is introduced early in the album. “Lovesexy” as a conceptual framework is never made fully clear, but it seems to be a state of spiritual contentment that fuses a love of God and a connection with humanity via sexuality. The paper will explore the visual presentation of such themes through an analysis of the album cover, music videos, and art direction as part of the evolution of Prince’s visual identity and will consider Lovesexy’s visual style as Prince’s personal mythos.
The paper also explores the controversies surround the Lovesexy album cover. It references the historical roles and functions of the album cover, Prince’s status as a visual icon on his cover art, and comparative perspectives on his nine preceding album covers. Moreover, the analysis incorporates the mainstream cover norms at the time of Lovesexy’s release, photographer Jean-Baptiste Mondino’s collaborative approach to the project with Prince, and ways in which negative critical response to the resulting art contributed to its relative commercial failure. The assessment interrogates multiple possible readings of the cover and its implications for Prince’s visual presentation on later releases. Lovesexy is one of Prince’s career high’s, a landmark album that displays an artist at the peak of his creative powers using philosophical constructs both visually and aurally in a way rarely seen in the mainstream. Thirty years since its release, it sounds and looks more exciting than ever.

The momentum building around the analysis of Prince’s life and work is reflective of the academic interest from scholars in a range of disciplines across the world. Plans are emerging to bring this work together and will be shared soon.

The EYE NO SYMPOSIUM WEBSITE with more info bios and abstracts can be found here:
http://lovesexy.polishedsolid.com