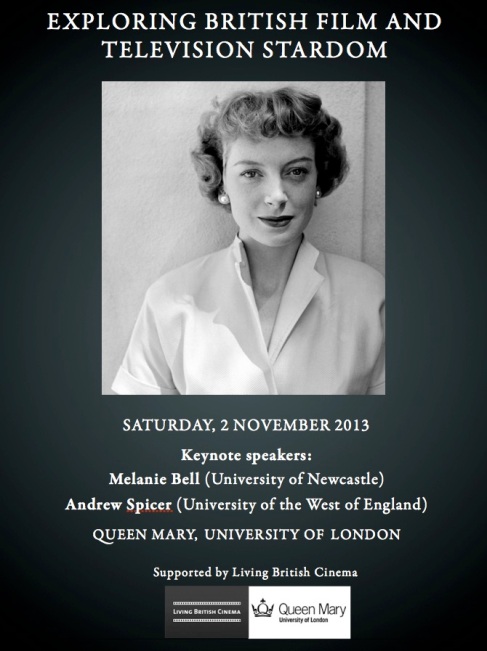 A little late on this one, but it looks great. Organised by Julie Lobalzo-Wright and Adrian Garvey.

Dr. Andrew Spicer (University of the West of England)

While British cinema and television history are thriving fields of scholarship,the issue of stardom has been insufficiently explored in national terms, and most British star images suggest that the dominant Hollywood model, associated with individualism, glamour, and consumption, sits uneasily in a British cultural context.

A decade after groundbreaking work by Geoffrey Macnab, in Searching for Stars: Stardom and Acting in British Cinema, and Bruce Babington’s British Stars and Stardom: From Alma Taylor to Sean Connery, there are new directions in star studies to consider, including performance, fandom and transnational stardom. Has film stardom now been usurped by celebrity, calling into question Christine Gledhill’s assertion that cinema “still provides the ultimate confirmation of stardom”? Meanwhile, television in this period has been marked by the phenomenon of a wave of British stars, including Hugh Laurie, Dominic West, Idris Elba and Damien Lewis, who have been reimagined in American long-form drama, and by the recent international success of Downton Abbey.

This one-day conference seeks to explore British stardom from historical, cultural, industrial and contemporary perspectives and will be an unprecedented opportunity to study stars in a British context. The conference aims to explore the issues around media stardom and national identity in innovative and challenging ways.  We welcome proposals from established academics, postgraduates, and independent scholars in the field.